I excited to blog again about Montana Skies.  They are coming to Indy on Wednesday.  Looking forward to checking them out, finally.

The above link is to an interview we had with Jonathan.

David Russell will be performing a recital concert in St Louis, Saturday, the 24th.  He is touring in support of his new CD effort: Grandeur of the Baroque.   The concert is hosted by the St Louis Classical Guitar Society.  There will be a master class with Mr Russell on Sunday @ 3 pm (CST).

The picture is hilarious, eh?  It is from the Baltimore Classical Guitar Society’s page.  Great job!

“Andrew York is one of today’s most visible and innovative classical guitar composers. His performances, with their strong folk-rock influence and accessibility, have attracted a number of listeners. York’s compositions are as acclaimed as his guitar playing. They have been recorded by several well-known guitarists including, John Williams and Christopher Parkening. York’s work was also recorded by the respected Los Angeles Guitar Quartet. He earned a Grammy Award duting his 16-year partnership with the Quartet. For the last decade, York’s touring schedule has spanned more than 30 countries. Jim Ferguson of Guitar Player Magazine says of York, ” his writing projects levels of honesty, spirit and magnetism that are rare in contemporary guitar composition.”

In review, I have to say that Mr York’s appearance is the loudest classical guitar recital I have ever attended.  The PA system at BSU’s recital hall was cranked up and the stacks of amplifiers certainly filled the hall.  We heard every nuance of the music Mr York masterfully demonstrated.  It was really quite nice to have the amplification; Prius Hall is large and perhaps not setup acoustically for a classical guitar recital.

Mr York’s repertoire for the concert were of his own composition; other than Bach’s Cello Suite No.5.   It is difficult, sometimes, to appreciate hearing music performed for the first time in a concert setting.  I have not studied Andrew York’s compositions or even sought them out on YouTube (I am stuck in the repertoire of the mid 1800s).  Initially, I thought it would be a difficult concert to sit through without loosing focus.  This was simply not the case, thankfully.  York’s pieces are very approachable to the non-musician, listenable and entertaining.  The Bach Suite was interesting in that Andrew tuned to C Minor to better emulate the tone of the cello.  The performance was solid and memorable.  I understand Mr York was a little under-the-weather for the performance.  He must have been acclimating to the crisp, fresh air of Muncie and detoxing from that smoggy southern California climate. – – – 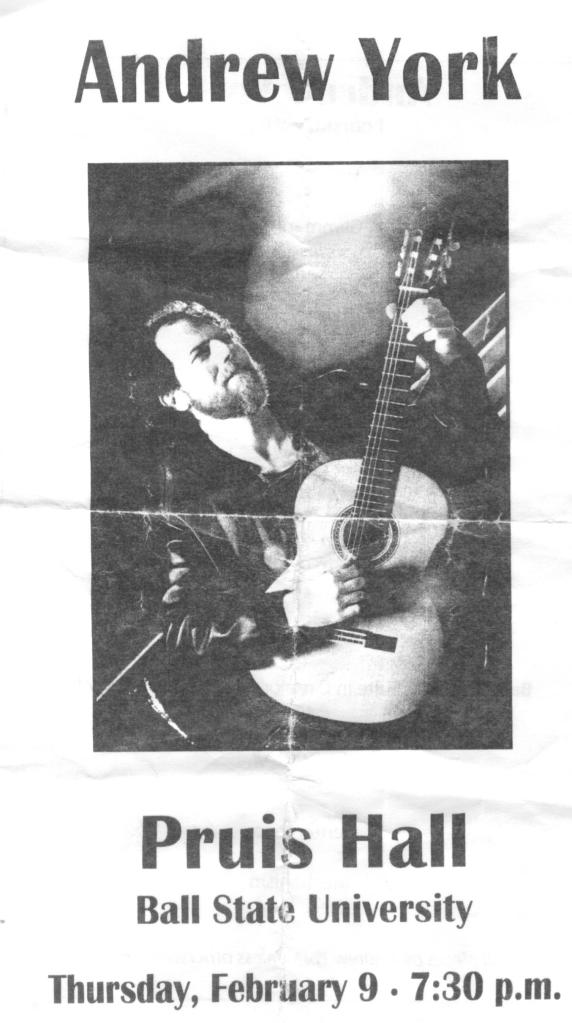 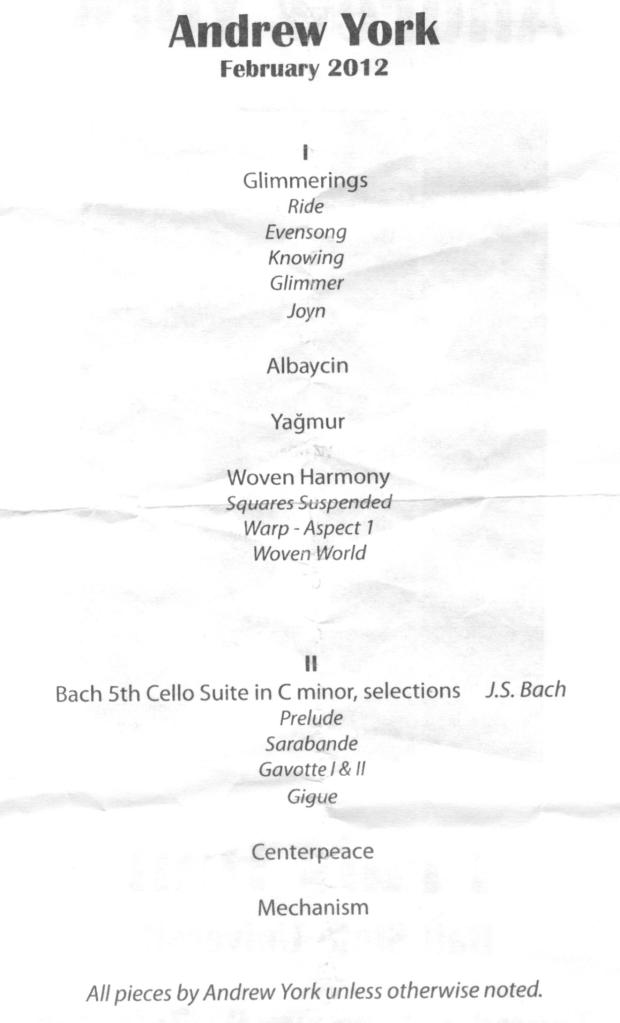 I listen to Mr Holzman quite often.  He has recorded several CDs for the discount Classical label Naxos.  My favorite CD of his and Naxos (& maybe of all time) is his recording of Johann Kasper Mertz’ Bardenklange suite.  He has also recorded Sor, Ponce & Lauro selections.  In 2005 he released the  premier recording of Sergio Assad’s Aquarelle.

Mr Holzman is playing in the intimate facility, Auer Hall.

What can I write that hasn’t been written before on the history, legacy, musicality or quality of a Romero family performance?  I struggle to conjure one unique perspective to share (more so that usual).  I will tell you about Set I where Pepe came out onstage to enthusiastic applause.  The title of the piece on the program is “Farrucas” by P. Romero.  Pepe announced a change in the program.  “Instead of performing the Farrucas’, he says, ‘there has been a request for the “Recuerdos de la Alhambra (Memories of the Alhambra)” by Fransico Tárrega.  And, so I will play this piece now and the Farrucas in the second program.”  So, with the announcement, the audience gasped in anticipation and approval.  Obviously, to the masses, the Recuerdos is the ultimate guitar work (in my opinion).  It was a wonderful experience to see the smiles and fascination in the audience that night.  When Pepe finished there was a collective sigh from the audience (really, everyone sighed).  Amazing.  Unforgettable. 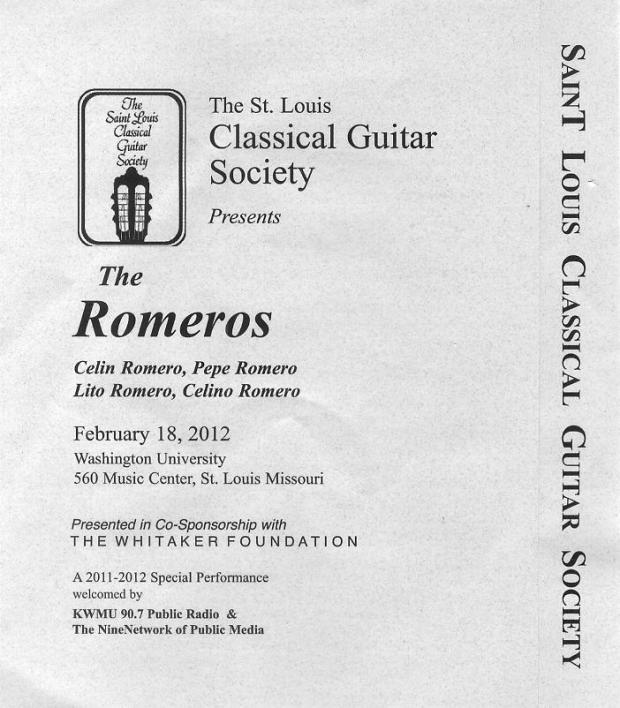 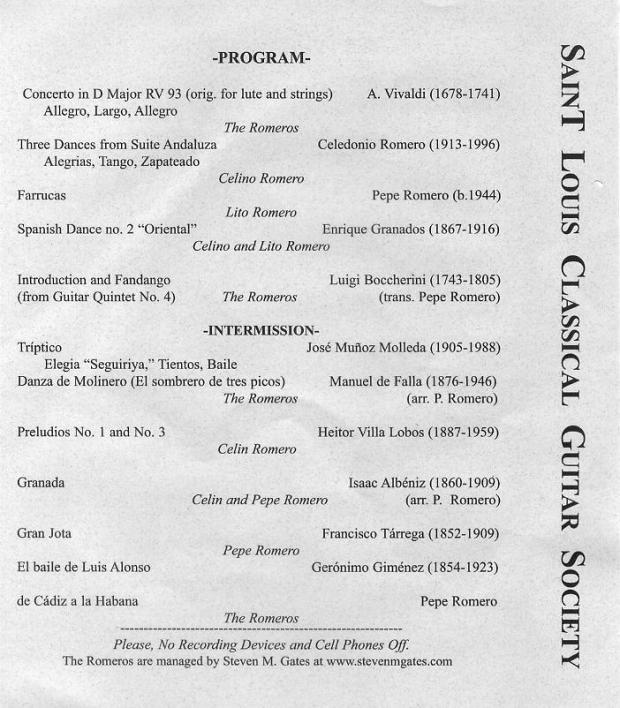 Yes, LAGQ has played in most of the sacred performance facilities in the world… an

For three decades on the concert stage, the members of the Grammy® Award-winning Los Angeles Guitar Quartet have continually set the standard for expression and virtuosity among guitar ensembles, while perennially redefining themselves in their musical explorations. Popularly known as the LAGQ, the Los Angeles Guitar Quartet, is recognized as one of America’s premier instrumental ensembles. As one of the most charismatic groups performing today, their critically acclaimed transcriptions of concert masterworks provide a fresh look at the music of the past, while their interpretations of works from the contemporary and world-music realms continually break new ground.
The LAGQ has given recitals in many of the world’s top venues, including Chicago’s Orchestra Hall, London’s Wigmore Hall and Southbank Centre, Tokyo Opera City, and New York’s Lincoln Center and Carnegie Hall. They have toured extensively in Europe and Asia, where they were featured at the Hong Kong, Singapore and Manila International Arts Festivals and recently made a highly successful debut in Beijing. Performances in Moscow close out 2011 and orchestral performances in Sydney and Perth in November 2012 will mark the Quartet’s first-ever visit to Australia. Summer 2011 includes a Germany tour as well as debut performances at the Minnesota Beethoven, Big Sky (MT) and Skeneateles (NY) Festivals, and a return to Grand Teton Music Festival (WY) for a week-long residency including a solo concert and an orchestral program conducted by Matthias Pintscher.
In the 2011-12 season, solo concerts and residencies take the LAGQ throughout the United States and their performances of Rodrigo are highlights of the Jacksonville (FL) and Madison (WI) Symphonies. Projected for residencies in Loudoun County Virginia and at Valparaiso University in Indiana is a new work for the LAGQ and Guitar Orchestra by Japanese composer Shingo Fujii; this work will be dedicated to those affected by the 2011 Earthquake and Tsunami. Productions of “The Ingenious Gentleman Don Quixote: Words and Music from the Time of Cervantes” with guest artist, Firesign Theatre veteran and voiceover actor, Phil Proctor continue to delight and expand audiences in St. Louis and Los Angeles this season. The St Louis performance at the Sheldon Theater will be recorded for DVD and available in 2012. This project was originally developed and premiered in collaboration with the British actor John Cleese actor John Cleese at the Santa Barbara Guitar Festival and tours with Phil Proctor have been received to great acclaim at numerous venues across the US and Canada.
A highlight of 2010 was the Telarc release of “Interchange,” their first recording of concertos by Rodrigo and Assad. “Interchange for Guitar Quartet and Orchestra,” the new concerto written specifically for these four virtuosi by Brazilian composer and guitar master, Sergio Assad and featured on the Telarc CD, recently received a Latin Grammy® nomination for Best Classical Contemporary Composition. This work originally premiered in 2009 as part of the Southwest Guitar Festival with the San Antonio Symphony and subsequent performances included the Rochester Philharmonic, and the Seattle, New Jersey, Santa Barbara and Delaware Symphonies. The work was then recorded with the Delaware Symphony and Music Director David Amado.
Past highlights have included performances of the Rodrigo “Concierto Andaluz” at the composer’s official centenary in Spain at the invitation of his daughter and to a crowd of thousands at the Hollywood Bowl, tours in support of their “Brazil” CD with vocalist Luciana Souza and, a special New Year’s Eve Celebration at the Tisch Center at the 92nd Street Y(NY) and serving as two-time curators for the week-long guitar celebrations in Santa Barbara sponsored by the Symphony. Members of the Quartet also performed and recorded two works of Osvaldo Golijov with the Atlanta Symphony in Atlanta and at the Ojai(CA) and Ravinia(IL) Festivals.
The LAGQ’s CD, “Guitar Heroes,” released on Telarc, won the group their first Grammy Award in 2005. It is a heartfelt salute to the great players who inspired the quartet, as individuals and as a group. It has received raves for its unique ability capture the feeling and fervor of diverse musical styles such as jazz, bluegrass, rock and flamenco. In November 2008, this recording joined those by artists such as the Who, Pink Floyd and Dire Straits on Sound and Visions “Top 10 Surround Discs of All Time”. Their first Telarc CD, “LAGQ – Latin,” features their popular transcription of Bizet’s Carmen, along with works from Chile, Cuba and some new original works by members of the quartet. This CD, which has received raves from listeners and critics alike, received a 2003 Grammy nomination and the Super Audio CD (SACD) version won the award for “Best Made for Surround” at the 1st Annual Surround Music Awards. The LAGQ’s release, “SPIN” (2006), shows yet again that the group is equally at home in a wide variety of musical genres and also features several commissioned works from their recent collaboration with percussionist Colin Currie. The ensemble’s current release, LAGQ-Brazil (Telarc, 2007) continues to receive raves and includes performances with singing sensation Luciana Souza. The LAGQ’s “Interchange” CD (March 2010) features their long-awaited recording of Joaquin Rodrigo’s “Concierto Andaluz” and the premiere recording of Sergio Assad’s “Interchange” with the Delaware Symphony Orchestra. The LAGQ’s first live-concert DVD appears on the Mel Bay Artist Series.

For more information about the Los Angeles Guitar Quartet, visit their website at www.lagq.com.

Posted by Matthew Beal in Classical Guitar Life on November 13, 2011

Here is something that I’ve wanted to post for some time.  This list was a gift of a colleague many years ago, originally printed in the Flatpicking and Madolin Catalog (not sure which company).

Gohar Vardanyan, who was gracious to provide this blog with a fascinating Q&A, will be in Bloomington ‘today’ November 12th.

Here is the interview from the blog…

Posted by Matthew Beal in Classical Guitar Life on October 5, 2011

I am an impulse shopper.  Idle time in any electronic department of any store can lead to uncontrollable purchases of electronic equipment.  I will typically avoid these situations altogether by staying out of these stores.  Several months ago, I had a weak moment which led to a morning stroll to the neighborhood Target, not exactly a tech super-store but, I did find an electronic department and therein a beautiful Acer Droid Tablet.

To those of you who do not understand the attraction to tablets, in general, here are a few great things:

There are disadvantages too.  Mainly security issues.  Allowing the cool internet stuff also allows the bad malware stuff from those questionable web sites.

So, where to get the sheet music?  There are plenty of options online, both free, public domain and retail outlets.  The Android offers Amazon Kindle’s App which provides many titles for download.  However, some (if not most) of these titles are public domain and are available from other sites.  Such as: 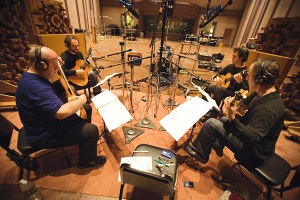 Thanks to St Louis Classical Guitar Society for the heads-up email!

The Ingenious Gentleman Don Quixote: Words and Music from the Time of Cervantes

“—-Don’t miss this rare opportunity to hear the ever-popular Los Angeles Guitar Quartet in a totally new way: on Wednesday, October 19, they will present an innovative theatrical/musical work inspired by the timeless DON QUIXOTE!

—-With the brilliant comedian Phil Proctor (of Firesign Theatre fame), they’ll perform a three-act, multi-media show that illuminates the humor, pathos and surrealism of Cervantes’ novel.

—-Accompanying the virtuoso narrative (Mr. Proctor will portray more than a dozen characters) LAGQ will play William Kanengiser’s ingenious arrangements of Spanish Renaissance music, featuring many “greatest hits” of the Golden Age. In addition to this ambitious stage production, LAGQ will  also play some of their concert favorites, including Rossini’s “Barber of Seville” and Bizet’s “Carmen.”

—-Be a part of history!  The performance will be videotaped by Mel Bay Records for release as a commercial DVD.